This time we wanted to watch the sunrise. We’d been postponing it for many days and finally got up at 5:15am, drove a bit with the van and there we were… a bunch of people who just met a couple of days ago, enjoying something as simple as a sunrise. Sunsets, moonlight, sunrises are just perfect. These are the kind of simple things that bring people together.

We packed everything up after breakfast and travelled for about an hour until we reached the Grotto. 144 stairs down to see this very quiet place. Since we were in a dry season we couldn’t see any waterfall and the water was green so we figured out it was not a good place for swimming at that moment. However, it seemed like a fun place to spend a few hours in another time as it has a few rope swings.

We climbed back up and headed off to Emma Gorge, there are a few lookout points on the way but you don’t even have to stop, put your phones down and just enjoy the unbelievable views as you go.

As we got closer to Emma Gorge we encountered our “first” problem. There was a little creek that we had to pass through. We didn’t want to risk it so we left the van on the side and walked across. We arrived at the Emma Gorge Resort just a few metres away, got a map and figured out our next move.

Instead of starting with the walk to Emma Gorge we decided to go straight to El Questro, try to make it to Station, where we would camp (we couldn’t wait to take a proper shower after a few days), maybe do some other stuff and then head off to Emma Gorge and Zebedee Springs the next morning.

Well, with that decision made, we were about to have the best adventure of our trip. We had to cross two creek crossings to get to the station though. If we didn’t want to go across that first little creek I don’t know why we thought we could go across 2 other creeks that were longer. But we were positive! To be honest, I couldn’t think of us not being able to visit El Questro! I just didn’t even think that as a possibility.

We drove along a very corrugated road, with all the 4wd cars passing us by, but we were in no rush. We took our time to do it. And finally, there we were, slowly stopping our van in front of our first obstacle. A creek crossing. What I loved about that was how our minds worked, trying to find the best way to do it. Some of us just jumped off the van and started walking over the water to see how deep it was and which path was the best way across.

We were celebrating like kids who won a soccer match at school. We kept driving for a few more minutes and there we were, in front of our longest and deepest obstacle. We look at it as cowboys about to fight.

Other cars passed us by, and some of them asked us if we needed any help but we thought we could handle it. Then, a white Toyota Landcruiser with an old couple inside came by. The woman came back to us right after we stopped at the 2nd creek. She told us to start crossing and in case something happened they would help us out.

Again, we tested how deep and rocky it was. We gave it a go and yes, the back wheel on the left side of the van hit a rock and got stuck. They came back to pull us out. In no time we were on the other side of the creek but I had to say… for a few seconds we held our breath.

They asked one of us to hop on their white Toyota so they could show us where to find them after we checked in. I was a bit curious about them so I offered to go myself.

Her name was Tracy and he was Mark.They were a retired Aussie couple from Cairns who sold everything they had and bought a camper van, a proper 4WD and left in search of a different lifestyle traveling and working around Australia.

Adopted by a family

They offered to give us a lift to the El Questro Gorge later. We would need a 4WD like the one they had to reach it. We checked in, got our tents ready and walked over to them. Tracy was our driver 🙂 I was amazed about how much she knew about cars, 4wd, camping and stuff like that. As she was telling us her adventures around Western Australia when she was younger, we were crossing a very deep creek with the water covering half of the car. I felt like I was in a real safari, it was a fun adventure!

We arrived after a few minutes of driving and she said we could probably find someone to give us a lift back. But, to let her know once we were back. In the worst case scenario, if we didn’t come back, she would pick us up. However, we thought we were going to get lucky.

Out in the jungle

We started our walk through this path covered with mud, some rocks and in between palm trees. It was around 2pm. We followed a blue mark on the rocks to mark the hike, and we walked across little rivers along the tall orange and red Gorge. It was such a great combination of colours. It felt like we were in a jungle in the middle of the desert. Everything was so green, we could feel the fresh air, and the sound of little waterfalls as we were reaching the end of the trail. We stepped from rock to rock, got our feet wet and muddy and finally there we were, ready to jump for a swim in one of the highlights of The Kimberley region.

But first, food. We were starving so we got some wraps and had a sweet tooth for a bit with some bread with nutella. I was enjoying my picnic on a big rock while looking at people swinging from tree ropes before jumping in the water. FUN!

Finally we went for a swim, it was a very refreshing one and we even found two guys who were willing to give us a lift back to the campground. We had the whole Gorge for ourselves, it was so peaceful, that if I knew I didn’t have to walk a long way back I would have stayed longer.

We started on our way back, jumping from rock to rock while admiring the stunning view of the Gorge as the sun was going down. The girls and I got lost, at some point I was a bit scared as we were going between the bushes. And hell no, this is Australia, you don’t step on the bushes!

We made it out and there was Tracy! Waiting for us to bring us to the camping area. We gave her a big group hug saying thank you! She was incredible. It’s funny how things turn out when you actually need help. That’s the thing, in one way or another, sooner or later you’ll find it. Things will work out at the end. They didn’t just help us by towing our car out of the water, they were also taking care of us for a few moments like our parents. 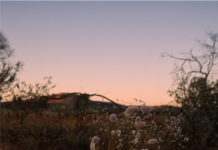 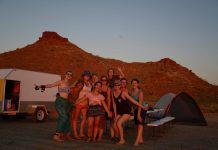 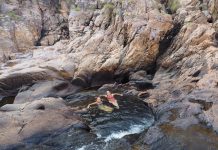